Famous Throughout the World: An Introduction to the History of Valentine & Sons Ltd., Dundee and London and the Photographic Postcard 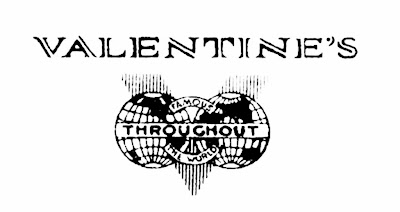 The Hemera curated exhibition Building an Empire: The Photographic Factory of Valentine & Sons took place at Format International Format Photography Festival 2013 from 7 March - 8 April 2013 and represented a changing cultural, social and economic landscape through the photographic images of the picture postcards mass-produced by the Valentine & Sons factories. Moving from the strong-hold of the British Empire in the late nineteenth and early twentieth century through two World Wars until the closure of the final Valentine factory, then owned by Hallmark, in 1994; covering over one hundred years of image-making and dissemination throughout the world. The exhibition contained a mixture of original postcards and reproductions of postcards and also revealed how older images taken in the days of the ‘view’ were re-appropriated for the burgeoning postcard industry, sometimes pre-dating the postcard itself. The text below forms an introduction to the exhibition and the history of both Valentine & Sons and the photographic postcard, and is a re-working of the exhibition information text.

The story of the Valentine & Sons empire begins in Dundee with the birth of James Valentine in 1815. After training as a portrait painter in Edinburgh, James Valentine (1815-1879) returned to Dundee and established a successful engraving business, eventually opening a photographic studio in 1851 to add to his already flourishing enterprise as demand for portrait photographs was booming in the UK. Yet it was James’s son William Dobson Valentine (1844-1907), followed by his son Harben Valentine (1869-1949), who expanded upon these first forays into the commercial photographic industry and created the empire that dominated the photo-postcard landscape at the beginning of the twentieth century and beyond.

It was in the 1860s that William Dobson Valentine, both a chemist and landscape photographer who had trained in the studios of Francis Frith, assisted his father in steering the company through the transitions that would establish it as a dominant producer of ‘views’. Valentine & Sons, alongside another Scottish company, George Washington Wilson of Aberdeen, became known for their topographical scenes in view-card, and sometimes book, form. At this time the expansion of the railways had created the British tourism industry and these cards provided a souvenir, even evidence, of travel that fed the desire for experience and knowledge in the late nineteenth century. Photographic processes were also advancing and William Dobson Valentine oversaw the company’s transition from using the wet collodian process to a dry plate process which enhanced mobility, which was especially important when isolated views were required.

Then in 1870 the postcard was introduced to Britain. Initially blank, the price included postage which was printed directly onto the reverse of the card. Pictures were only added circa 1894 after the introduction of the halfpenny stamp and the legalisation of private postcard production which ended the monopoly of the Post Office, and created a commercial postcard market for the first time. These developments alongside a cultural preference for ‘views’, the maritime trade routes of the British Empire which were its postal routes, and the advancement of photo-mechanical processes for the reproduction of photographic images created the fertile landscape for an explosion of photographic postcard production.

The Valentine’s themselves moved into the postcard business finally in 1897 and the transformation of the Valentine and Sons business from craft workshop to photographic factory had begun. Utilising techniques akin to a mass-production line in the creation of their photographic postcards ensured that a vast array of images could be swiftly produced and distributed and sold for a more affordable price. By 1907 the Valentine’s had their own workforce of commercial photographers, retouchers and printers which mirrors a more general shift to industrialisation in the mass production of imagery in other parts of society such as the mass media. It may be thought that images associated with the pastoral idyll and seaside tourist destinations were the most prevalent and popular but there were also a significant amount of photographic postcards that directly depicted the industrialisation of society. Postcards of workplaces, such as factories, the tools of an industrialised society, trains and other machinery, and the workers themselves were photographed, printed and posted throughout the British Empire and beyond and shows a shift in imagery to appeal to a broader demographic. Through the postcard, the photographic image had become both commercial commodity and personal souvenir whilst fuelling the propaganda of the empire.

The postcard was at its most popular in the UK from 1902 to the outbreak of the Great War in 1914. In 1902 the split back postcard was introduced and allowed for both message and postal address to be written on the reverse of a picture postcard which inevitably boosted sales. At this time Valentine’s offices, or factories, were opening throughout the British Empire and the company expanded into the United States as demand grew. Commercial rivalry between British publishers and those in Germany was intense and were it not for the 1914-1918 war it is possible that the Valentine’s company may never have survived the fierce competition. Military postcards superseded other postcard imagery during World War I as the dominant aesthetic and had their place in the sharing of information between loved ones; boosting morale and promoting the British military at home and abroad. Understandably though postcard use dropped significantly and, while this recovered in the period after the war, it never reached the heights of the early twentieth century and the slow and steady decline of the photographic postcard industry had begun.

Posted by Hemera Collective at 15:59